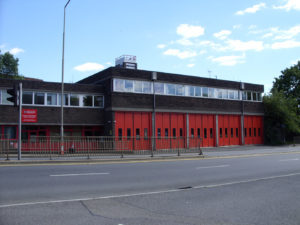 A Michelin-starred chef has visited High Wycombe fire station and showed firefighters how to prepare what is billed as ‘the ultimate English breakfast omelette’.

Firefighters gave Michelin-starred chef Tom a warm welcome when he arrived with the film crew back in June. Crew Manager Luke Brown said : ‘After meeting Tom and the crew, we asked Tom to get into some fire kit and muck in. Tom seemed to be up for a laugh and got involved with the banter.

We even took him outside so he could go up in the station’s 100-foot turntable ladder.

When we went upstairs to the mess deck, the director asked for a volunteer to cook with Tom. After a quick push, our one and only Tony Dumbarton volunteered – and we couldn’t have had a better firefighter for the job.

Tom showed Tony how to prepare a full English omelette and, after many takes, Tony achieved this with absolutely no stick from the rest of the crew.

Tony then talked to Tom about the importance of smoke alarms in the home and how keeping the kitchen clean and free from grease and crumbs can help prevent a fire.

Once Tony and Tom’s omelette was cooked, we sat as a group and tasted the delights.‘

High Wycombe has been chosen as one of only 57 towns to win funding from the Future High Street Fund competition.