The roadworks in Oxford Road are causing traffic chaos 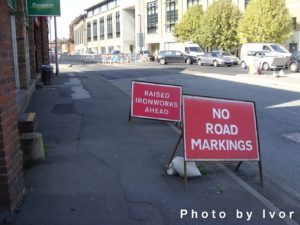 Have you driven along Oxford Road recently? Did the road works cause you inconvenience?

The so called ‘Masterplan’ for traffic movement through High Wycombe was supposed to make things easier but already the preparatory work is causing chaos.

For the past few weeks work has been taking place creating the ‘Westbourne Street Link Road’ and in the parts of Oxford Road where a roundabout will join the link road to the A40, Oxford Road. 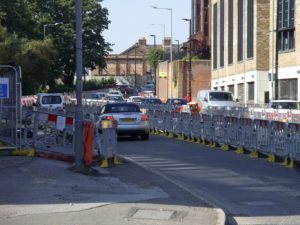 By the look of things the roundabout is going to be located several hundred feet further up the road from where the picture above was taken.

However the road surface was removed all the way back to the junction with Brook Street several weeks before any re-surfacing works were ever likely to take place.

For weeks vehicles have been manoeuvring gingerly over raised iron works left when the surface of the road was removed. Drivers have been slowing down for the large ‘ramps’ left where the proper road drops to the level after the surface was removed not to mention avoiding the chippings left on the road surface.

What a mess these roadworks have become! My good self does not see why there was a need to remove the road surface when the workmen appear to actually be working on the link road which is actually to the left of the Oxford Road towards Desborough Road.

Now I understand that Oxford Road is going to be close from next week (Monday 25th October until Thursday 29th October 2015) during the daytime so further works can be carried out and the roundabout linking the link road to the A40, Oxford Road can be created.

What inconvenience! What a long and drawn out affair these roadworks have become! What a mess!

Your humble servant has said many times before that the ‘Masterplan’ is more of a ‘Disasterplan’ for traffic flow in Wycombe.

Indeed yours truly fails to see how a narrow road like Westbourne Street can handle all the traffic that goes over the Abbeyway Flyover and up Oxford Road on the A40 towards West Wycombe.

In my opinion the Masterplan is no more than something dreamt up but the powers that be to justify their existence, waste public money and cripple once and for all the movement of traffic through the town centre.

While Wycombe will get gridlock and traffic chaos no doubt one of the great and good who thought of the scheme may be in line for a MBE.

Already the works on the Westbourne Street link road have caused chaos and I fear the worst is yet to come when more elements of the daft traffic plan are implemented.

Isn’t it about time to face reality and accept that the traffic system we have in Wycombe already is far better than anything the Masterplan can bring?