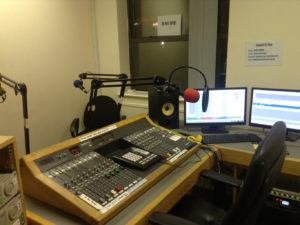 Sadly Wycombe Sound have come to the end of their latest twenty eight day Ofcom Restricted Service Licence and the FM transmission service has been turned off.

I so enjoyed listening to Wycombe Sound, indeed the time station spent on the air was the best 28 days of the year.

This year there were so many interesting and exciting programmes and features to listen to.

Producer Luke was set some fiendishly difficult questions by Phil Catchpole on the Drivetime show in attempt to find out how much producer Luke knows about High Wycombe.

Philippa’s mid-morning show contained so many interesting features and guests. Joe Shennan presented some excellent late night phone in discussion programmes on topics ranging from Wycombe’s transport problems to whether or not we should leave the EU.

An enthralling radio drama called ‘Made In Wycombe’ burst onto the airwaves this year, very good it was too.

Then of course there were the music programmes. Cathy presented a wonderful programme featuring music from the 80’s, Don featured hit’s from the 70 and DJ Frost played some modern tunes that were very good too. There were also live music performances from the stations ‘Blue Room’ performance area.

How on earth did they get so much into just 28 days?

The best thing about Wycombe Sound is that it really is community radio for the community.

Then of course there was some very handy local traffic information read out on air telling motorists of blockages and hold ups on Wycombe’s roads.

On my way home in my trusty motor one evening my good self happened to get stuck in a traffic jam so yours truly pulled over to a safe place and phoned the studio to tell them of the hold up.

Within a few seconds the details of the traffic jam were being read out live on Wycombe Sound to alert other motorists of the problem.

Wycombe Sound is the complete community radio package, something for everyone indeed it has become a vital resource at the very heart of our town.

I would like to take the opportunity to personally thank everyone associated with the station for doing such an excellent job and for all the hard work they put into the 2015 broadcast. There are so many people in the town who appreciate Wycombe Sound and it’s missed ever so much when it’s not on the air.

Why on earth is this excellent radio station not a permanent feature in Wycombe on the air all the time?

Why is Wycombe Sound having to exist twenty eight days at a time once a year?

If any radio station was deserving of a full five year broadcast licence from Ofcom surely it’s Wycombe Sound?

The presenters and technical staff are willing, the permanent studio is built, the listeners have their radios ready but the FM transmitter is now switched off.

The sooner Wycombe Sound gets a permanent licence to broadcast the better.