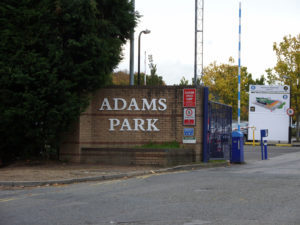 After a string a home defeats Wycombe Wanderers were looking for a victory when they played Exeter City at Adams Park on Saturday 13th February 2016.

Disaster nearly befell the Blues when Jayden Stockley almost scored for Exeter early in the match however his nodded attempt at goal went wide.

With the score goalless at half time Wycombe came out for the second half with added determination. Their efforts paid off in the fifty third minute when Stephen McGinn placed a curling shot from twenty five yards out into the top corner of the Exeter net.

It was McGinn’s first goal for Wycombe and one that not only won them the match but also ended the string of home defeats which the Chairboys have suffered in recent weeks.

Wycombe Wanderers may have only had 48% possession but four of their seven attempts on goal were on target compared with just three of Exeter’s seven attempts.

Today’s win was crucial for Wycombe who now find themselves in fourth position in League two with forty nine points from thirty games. Back in the play off positions, an end to the home defeats and a team that is winning again. The Blues are back, well done to Wycombe.

A car overturned following a collision in Princes Risborough on the morning of Tuesday 26th January 2021.

Police have charged a man in connection with drug supply offences in Chesham.