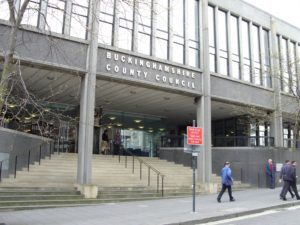 On Tuesday 2nd September 2014 the Environment Transport and Localities Select Committee of Buckinghamshire County Council’s was handed a report outlining the likely state of oil and gas resources and the geological composition beneath the county’s surface.

The report follows the Government’s release of two areas of Buckinghamshire for prospecting licences, in the 14th landward licensing round, on the western and southern sides of the county.

It also comes just a few weeks ahead of a start on the county’s Replacement Waste and Minerals Local Plan which, Lesley Clarke, Cabinet Member for Planning and the Environment, told the committee, will contain reviewed policies to cover onshore oil and gas extraction.

Commercially-viable quantities of conventional gas do not appear to be present in these two areas, the Select Committee was told. Considering geological conditions most suited to the presence of oil and gas-bearing shales it appears unlikely that gas-bearing shales are present.

Mrs Clarke said ‘It’s likely to be costly for companies to prospect here in Buckinghamshire and they’ll probably want to go for low-hanging fruit first. But you can never say ‘never’ and as a responsible council serving the best interests of our residents oil and gas will be an issue we will need to consider in the Replacement Minerals and Waste Local Plan‘.

The Lead Officer for Minerals and Waste Panning Policy, Lester Hannington, told the Select Committee during the last 50 years the limited drilling in Buckinghamshire had shown no commercially viable quantities of gas, and more recently there has been no more interest in prospecting.

Mr Hannington said ‘But the UK tax regime is more favourable to prospecting explorers now, coupled with greater interest in unconventional gas exploration, which is raising ‘fracking’ in the public awareness. Even though it appears unlikely that gas bearing shales are present in Buckinghamshire, we still need to keep our policies up to date so as be effective if the Council receives applications for exploration for oil and gas.‘

Mr Hannington said the Replacement Minerals and Waste Local Plan would take account of new Government planning practice guidance covering oil and gas as well as rules and regulations that already exist such as those exercised by other regulators such as the Environment Agency.

In a previous round of onshore licensing, an area on the southern tip of the county was earmarked, but no one took up the licence.

Potential prospectors have until 28th October 2014 to apply for Government licences and the Government is not expected to make an announcement until next year.

Potential prospectors would also need to apply for planning permission from the County Council, a permit from the Environment Agency and a well consent from the Health and Safety Executive. Depending upon the location they may also need to consult Natural England, the Hazardous Substances Authorities, and the British Geological Survey.

The report was welcomed by select Committee Chairman Warren Whyte who said ‘It will be important to maintain our communication flow to ensure all sections of the community are kept up-to-date and able to participate in the debate.‘

« Refrigerator caught fire at property in Botley Road, Chesham
Teenager exposed himself during one of three suspicious incidents in Princes Risborough »