Options identified to protect Marlow Bridge from use by overweight vehicles 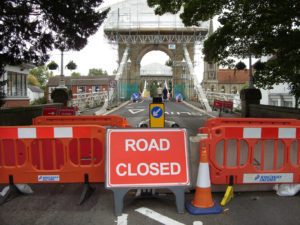 A short list of safety options has been identified to protect Marlow Bridge from the threat of use by overweight vehicles.

Started in April 2017, the study by Transport for Buckinghamshire has produced a shortlist of preferences which have been presented in a report to Mark Shaw, Buckinghamshire County Council Deputy Leader and Transport Cabinet Member.

Extensive inspection and testing of the bridge structure took place during a two month long closure in the autumn of 2016 after a 37 tonne lorry forced its way across the Grade I listed structure on Saturday 24th September 2016. The weight limit on the bridge is just three tonnes.

‘The engineers have even looked at the technology some authorities use in bus lanes to warn straying motorists to get out,‘ he said. ‘Now we need to weigh up all the options, bearing in mind our stiff budget constraints, to make sure we’re doing what will work to safeguard the bridge.

Once a preferred option is selected, we’ll need to look at the delivery programme and funding options.‘

Longer term, said Mark, the County Council would continue to work with Marlow engineering consultant Robin Atkinson, of Howes Atkinson Crowder, who has created computer model of Marlow Bridge allowing engineers to see how it behaves under certain stress conditions.

‘We’d like to test how critical the current weight restriction is, so that we’re able to consider whether or not it’s possible to vary this in the future,‘ said Mark. ‘We want to make sure that we don’t put this iconic structure at risk.‘

Marlow Bridge was designed by William Tierney Clark and built between 1829 and 1832.