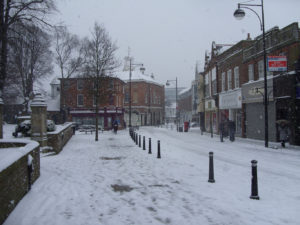 For a second day snow and ice has caused disruption in High Wycombe and South Buckinghamshire.

Snow has fallen virtually continuously for 48 hours leaving many residential roads impassable. Strong winds whipped up the powdery snow laying on roof tops and on the ground leading to blizzard conditions in some parts of town.

Taxi services were in demand with some private hire companies fully booked on the morning of Friday 2nd March 2018.

Dustbin collections were suspended in High Wycombe on Friday 2nd March 2018 while the Wycombe District Council offices closed early at 3.00pm ‘due to worsening conditions‘.

Apologies, but we're going to have to close our offices at 3pm today due to worsening conditions.

A yellow warning of snow and ice has been issued by The Met Office taking effect between 10.30am and 11.50pm on Friday 2nd March 2018, further details can be found here.

On the railways services to and from London Marylebone were generally operating with some delays to services as detailed in the following tweet from the Chiltern Railways official Twitter page :

Chiltern Railways is still operating on all routes, however due to severe weather conditions, customers are advised that some services may be delayed. We expect this situation to last until the end of the day and possibly into tomorrow. More information: https://t.co/jodUCTFqOF pic.twitter.com/76rfME8Wng

The extent of the snow covering Buckinghamshire could be seen by looking at the live feeds from the web cams located at the Household Recycling Centres in Buckinghamshire :

An appeal for information has been launched by Thames Valley Police in relation to postal vote fraud in Totteridge, High Wycombe.

During the week of the Early May bank holiday 2021 a revised schedule of bin collection dates will be in operation in the Wycombe area and across Buckinghamshire.

An appeal for witnesses has been launched by Thames Valley Police following a serious injury road traffic collision in High Wycombe.

Man stabbed during a fight in Rutland Avenue, High Wycombe

An appeal for witnesses has been launched by Thames Valley Police following an incident in High Wycombe in which a man suffered stab wounds.

An appeal for witnesses has been launched by Thames Valley Police following an incident of affray in Chalfont St Peter.

An appeal for witnesses has been launched by Thames Valley Police following serious injury Road Traffic Collision in Gerrards Cross.

Mobile Coronavirus testing sites will be visiting High Wycombe, Princes Risborough and Gerrards Cross on various dates from 23rd April to 1st May 2021.