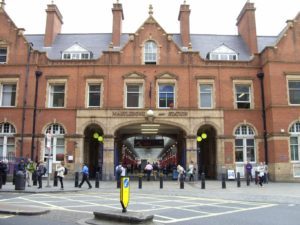 Please note the planned work has now been cancelled and services will operate as normal.

The text of this article originally read as follows :

There is to be a major change to train services into London Marylebone (via the High Wycombe and Wembley Stadium line) on Sunday 18th November 2018.

For one day the line between Wembley Stadium and Gerrards Cross will be closed to allow Network Rail to prepare the way for HS2. The work is part of Britain’s Railway Upgrade Plan.

At 2.00pm on Sunday 18th November 2018 there is also a football match at Wembley Stadium between England and Croatia.

An amended timetable will operate on Chiltern Railways services all day resulting in some journeys taking much longer than usual and some passengers may need to change trains to reach their final destination.

Customers are being advised to check their journey before travelling, be patient and allow plenty of extra time as journey times will be longer than usual.

The changes to service are as follows :

The following is a summary of recommended routes to and from London on Sunday 18th November 2018.

Further information is available on the Chiltern Railways website.