Armed Forces Day 2021 has been marked by veterans at the Royal Star & Garter Home in High Wycombe.

Armed Forces Day supports the men and women who make up the Armed Forces community, from currently serving troops to service families, veterans and cadets.

At the Home in Hughenden Avenue in High Wycombe, residents enjoyed an Armed Forces-themed bingo, took part in a sing-along and enjoyed a reminiscence party. Singer Molly Marie Walsh performed wartime classics live for residents at the Home on Armed Forces Day. 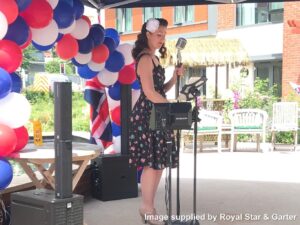 Royal Star & Garter Chair, Major General Tim Tyler, said: ‘This is an important day for everyone at Royal Star & Garter. It is a time to pay tribute to those who have served and continue to serve our country, and to remember the sacrifices that they and their loved ones have made. Despite the impact of the pandemic, we have still been able to gather to reflect, remember and thank our nation’s military family.‘