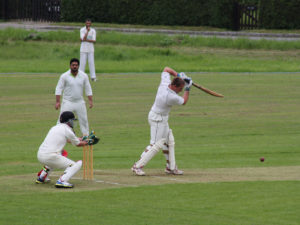 Thanks to fine weather all the matches in the Premier Division and Division 1 of the Kookaburra Mid Bucks Cricket League went ahead last weekend.

The shock in the Premiership was Downley’s loss at the hands of Bourne End, as a result Downley slip from first position in the league and now rest at fourth position with 97 points in total leaving them 14 points from Waddesdon who now top the Premiership League tables.

In a thrilling match at the Bradenham ground the home team were unable to beat Waddesdon’s target of 155-9 however Bradenham fought bravely to reach the target set by the visitors and did not give up easily. The picture accompanying this report show some of the action from the Bradenham match.

The results of the matches in Kookaburra Mid Bucks Cricket League played on the 31st May 2014 are as follows:

Premier Division League Table – After matches played on 31st May 2014

Week commencing Monday 12th April 2021 Transport for Buckinghamshire will be carrying out work at the following locations.