Thousands of people turned out to enjoy the Buckinghamshire and Milton Keynes Armed Forces Day which was held at Aylesbury Rugby Club on Saturday 17th June 2017.

The sun shone on a packed day of entertainment and celebration with members of the armed forces and their families as well as local residents.

Highlights of the day included a fly-past by the world famous Red Arrows, a breath-taking air display, live music and other entertainment.

Sadly the world record swing dance attempt was failed to set a new record however over three hundred people took part and enjoyed themselves in trying.

Sir Henry Aubrey-Fletcher, Lord Lieutenant of Buckinghamshire said: ‘It’s been a truly fantastic weekend of entertainment and celebration for our Armed Forces. Thank you to everyone who came along and all those who helped make the event the great success that it was.‘ 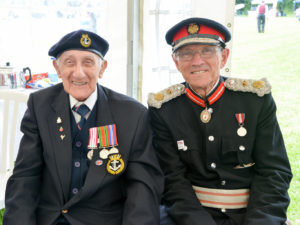 « Road surfacing works week commencing 19th Jun 2017
Wycombe residents asked to choose which community projects will get a share of £10,000 in funding »