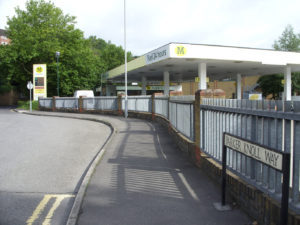 A woman was injured after being dragged across a petrol station forecourt following a robbery at Morrison’s petrol station, Bellfield Road, High Wycombe.

On Sunday 9th July 2017, at around 2.30pm, the victim parked her vehicle, a light blue Fiat 500, on the forecourt at Morrison’s petrol station in Bellfield Road to fill the tyres of her care with air.

As the woman was parking her car a man got in. The woman struggled with the man and he then drove the car at speed with the victim still holding onto the driver’s door which was open.

The woman was dragged across the forecourt sustaining cuts and bruises.

The vehicle was last seen heading along Parker Knoll Way towards Glenister Road.

The offender is described as a white man aged between 25 and 35 years old, about 6ft, slim with gaunt features and short mousey brown hair. He wore a beige or cream coloured short sleeved top and blue denim jeans.

Investigating officer, Detective Sergeant James Faulkner, based at High Wycombe Police station said: ‘It was very fortunate that the victim was not seriously injured.

The reckless actions of the offender could have resulted in serious injury to the victim and onlookers as he drove.

The forecourt was very busy at this time of day with lots of people around. I am appealing for any witnesses to this to come forward as well as any dash cam footage from vehicles.‘

Thames Valley Police are appealing for anyone with any information about the incident and who has not yet spoken to the police to please call 101 and quote 43170201779 or contact Crimestoppers anonymously.