Opinion : What price would you put on Wycombe’s magnificent Library Gardens? 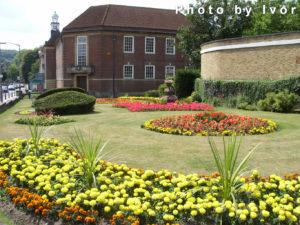 Anyone who walks down the High Street in High Wycombe will surely stop to marvel at the magnificent Library Gardens.

Situated on the corner of Queen Victoria Road and the High Street the gardens have remained virtually untouched since they were built in the 1930’s.

Sadly the old library closed at 4.00pm on Saturday 19th April 2008. For nearly ten years, yes TEN years, the old library building has been unoccupied and left to rot in a most disgusting way.

As if closing the library and leaving the building to rot for nearly ten years wasn’t enough now even the lovely gardens are under threat.

Apparently a footpath may be driven through the library gardens as part of phase five of the traffic Masterplan for Wycombe.

The documents related to the public consultation on phase five of the Masterplan acknowledged that allowing people into the library gardens ‘may lead to people not respecting and damaging the plants‘ and it could ‘encourage people to sit on the grass in the gardens causing possible damage‘.

If the powers that be are so worried about saving money then why not cancel the Masterplan completely and save all of the £14.5m? After all who in Wycombe is calling for the roads to be re-arranged anyway? Nobody from what my good self can tell.

If the Masterplan is so good why isn’t Aylesbury getting the same treatment? Indeed Aylesbury is getting a new ‘orbital route’ which is exactly what Wycombe needs but sadly we have been lumbered with the infernal ‘Masterplan’ instead.

In my opinion £400k is a small price to pay to keep the library gardens especially when so much money is wasted in other areas.

Sadly there appear to be those who seem determined to destroy the economic, cultural and physical heritage of Wycombe at any cost. Such desecration would never happen in Marlow would it?

Can you imagine Marlow losing it’s bridge? Just look at all the time and money that was spent recently when an overweight vehicle attempted to cross.

Marlow didn’t lose its bridge so why should Wycombe lose the library gardens?

Of course doing all the rearrangement of the roads is keeping a lot of people in jobs. All the works have to be dreamed up, planned, supervised and carried out.

If the dreamers and planners were not employed there wouldn’t be all these silly schemes. Just think of all the money that would be saved and we could all have much lower rate bills.

What worries me more is that when the re-organisation of the roads in Wycombe has been completed what daft scheme will come next and what other parts of our towns history will be destroyed in the process?