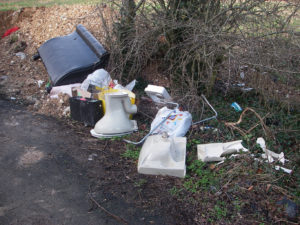 The waste dumped in a lane called Over the Misbourne, near Gerrards Cross.

A man pleaded guilty to an offence of fly tipping after being caught by a hidden camera dumping waste in a remote lane near Gerrards Cross.

The court was told that on the afternoon of Saturday 13th January 2018 the 37 year old man was filmed by a hidden camera installed by investigators from the Waste Partnership for Buckinghamshire. Images were taken of him as he dumped a toilet, sink, pedestal and other building material in a lane called ‘Over the Misbourne’, near Gerrards Cross.

His solicitor told the court that the 37 year old man was getting rid of the rubbish for a friend who couldn’t afford to pay to dispose of the waste. When he saw other rubbish dumped at the roadside he thought it would be all right to dump the items from his car.

Giving credit for an early guilty plea the magistrates fined the 37 year old man £738 and ordered him to pay £400 towards the council’s costs. A victim surcharge of £73 was also levied.

South Bucks District Council Cabinet Member for Environment Luisa Sullivan, speaking on behalf of the Waste Partnership for Buckinghamshire, said: ‘The site of this illegal dumping is off the beaten track, but still our cameras captured the offence and led to the successful prosecution of the offender.

Buckinghamshire and its neighbouring authorities have good facilities for waste disposal, and this case shows that if you choose not to use them and dump your rubbish in the Bucks countryside instead you may well end up in court.‘

The Partnership’s Illegal Dumping Costs campaign, launched in November 2003 to combat illegal dumping and waste management offences in Buckinghamshire, has resulted in over 660 convictions and a significant saving to the Buckinghamshire taxpayer principally through reducing removal and disposal costs.

Illegal dumping can be reported at www.buckscc.gov.uk/fly.

« Restoration of the Marlow Obelisk to begin on 22nd Aug 2018
Opinion : We dared to dream but the dreams turned to dust…. »