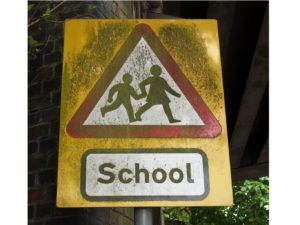 A while ago yours truly happened to see a television programme that featured a scene taken during an assembly at a real school.

Indeed the programme brought back memories of my own school days all those years ago. However one noticeable difference between then and now was that all the modern day children were wearing a school uniform.

Just as in my own days the children were sitting on the floor in the sports hall with the teachers sitting beside them keeping a close watch in case one of the little rascals was naughty.

The television programme even showed a teacher playing a piano while the children were singing. However yours truly doubts that, unlike in my time at school, someone had placed a ping-pong ball inside the piano so as to render some of the notes unplayable….

One thing struck me about the scene from the school assembly. While the children were smartly dressed in their school uniform the teachers were just wearing formally casual clothes. To be honest the teachers looked a scruffy bunch of rag-bag scarecrows.

If the children have to wear a school uniform then shouldn’t there be a uniform for teachers too?

Lots of professions have uniforms such as nurses, postmen, police officers, firefighters, ambulance crews, parking attendants, supermarket workers and even dustmen wear a uniform so why don’t teachers have to wear a standard uniform too?

Uniforms worn by professionals are, amongst many things, supposed to give status, maintain a professional standard and make people respect those who wear the uniform.

Doesn’t it seem hypocritical that the teachers make the children wear a uniform yet the teachers themselves wear whatever they like?

Surely it’s sending out all the wrong signals to make children dress in a certain way yet those who enforce the dress rules can turn up looking like a scarecrow?

Maybe if the teachers adopted a standard uniform the children would show them more respect?

Perhaps the schools could also say that the teachers can only buy their uniforms directly from the schools so they can fleece them for money to bolster school funds in a similar manner to the children?

An appeal for information has been launched by Thames Valley Police in relation to postal vote fraud in Totteridge, High Wycombe.

During the week of the Early May bank holiday 2021 a revised schedule of bin collection dates will be in operation in the Wycombe area and across Buckinghamshire.

An appeal for witnesses has been launched by Thames Valley Police following a serious injury road traffic collision in High Wycombe.

Man stabbed during a fight in Rutland Avenue, High Wycombe

An appeal for witnesses has been launched by Thames Valley Police following an incident in High Wycombe in which a man suffered stab wounds.

An appeal for witnesses has been launched by Thames Valley Police following an incident of affray in Chalfont St Peter.

An appeal for witnesses has been launched by Thames Valley Police following serious injury Road Traffic Collision in Gerrards Cross.

Mobile Coronavirus testing sites will be visiting High Wycombe, Princes Risborough and Gerrards Cross on various dates from 23rd April to 1st May 2021.