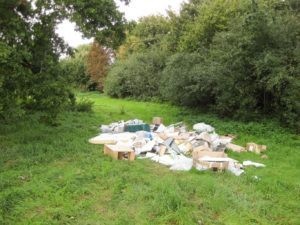 A consignment of waste dumped in countryside near Denham.

Fly tipping has dropped across Buckinghamshire for the first time in nearly six years.

According to the latest data from Buckinghamshire County Council, the figures which are based on actual fly tipping clearances, previously showed an average year to year increase of 14% from 2013 to July 2018. However, following the introduction of the county wide ‘S.C.R.A.P’ anti fly tipping campaign in summer 2018 the instances of unsightly dumping have started to reduce.

Mike Smith, Cabinet Member for Environment at Chiltern District Council and Chairman of the Waste Partnership for Buckinghamshire, said: ‘It’s good to see that our S.C.R.A.P campaign messages seem to be hitting home. No one likes fly tipping, it’s a blot on our lovely landscape, it’s often a danger to wildlife and its costs us all to clear it up.

While we continue with our zero tolerance approach to bringing fly tippers to justice, and we’ve just successfully taken our 696th prosecution, the big gains are in stopping it happened in the first place.

Our S.C.R.A.P campaign is there to help people dispose of their waste safely, responsibly and within the law. Just carrying out a few simple things like checking the licence of someone taking your rubbish away or not paying in cash can really help reduce fly tipping.

We all need to be very careful how we dispose of our rubbish. The last thing anyone wants is to find out that they have been taken for a ride by an unscrupulous trader. It may well cost you a huge fine and a criminal record – even a custodial sentence.

It’s great to see fly tipping reducing at last and I want to see that trend continue. If we all play our part we can scrap fly tipping for good.‘

Further information about avoiding fly tipping and following the five point S.C.R.A.P code can be found at www.recycle4bucks.co.uk/fly-tipping. If you wish to contact us to make us aware of a news event, to contact the editor or for any matter whatsoever in relation to this website our email address is [email protected]combetoday.com. We look forward to hearing from you.