Hundreds of revellers party at the Desborough Carnival in Desborough Road, High Wycombe 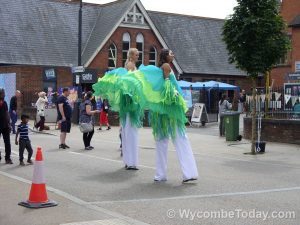 The sound of steel drums echoed around the Desborough area of High Wycombe as party goers enjoyed the entertainment which was complimented by food stalls that had been set up alongside the road for the first Desborough Carnival.

Children enjoyed themselves at specially designated play areas as well as on a play bus that was parked towards the northern end of Desborough Road. 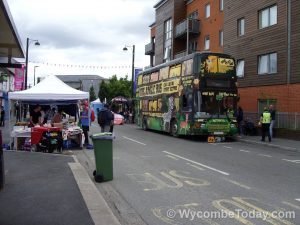 The centre of the action early on was the Wycombe Arts Centre where craft workshops and musical performances took place. 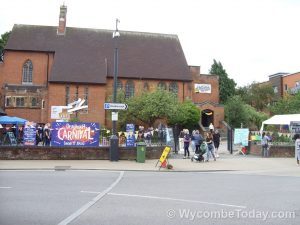 The atmosphere was good with families enjoying themselves watching the entertainment.

Road closures were in place to prevent traffic from entering Desborough Road with parts of West End Street, Short Street and Westbourne Street closed from 7.00am until 11.00pm. Desborough Road was closed to general traffic with no access.

While the revellers partied the afternoon away a large mural was being painted on the disused flats at Collins House (see picture below) at the southern end of Desborough Road.

A detailed list of the events that took place during the carnival can be found here.