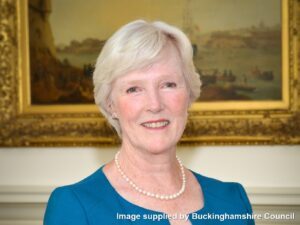 Lady Howe was appointed by Her Majesty The Queen in June 2020 and became the new Lord-Lieutenant of Buckinghamshire on Friday 27th November 2020.

Lord-Lieutenant Sir Henry Aubrey-Fletcher, Her Majesty The Queen’s official representative in Buckinghamshire stepped down after 14 years in the role, preceded by nine years as Vice Lord-Lieutenant.

All members of the Lieutenancy are required to retire when they turn 75 and Sir Henry reached that milestone on Friday 27th November 2020.

Lady Howe spent her childhood in the county, studied for a BEd degree in Cambridge, and worked subsequently as a teacher in London. She returned to Buckinghamshire with her husband in 1986 to look after his family’s estate in Penn where they brought up their four children. She has involved herself in school governorships and in many local charitable causes, being appointed a Deputy Lieutenant in 1995, and High Sheriff in 2010.

Lady Howe said: ‘It is a great honour to be appointed as Her Majesty’s Lord-Lieutenant of Buckinghamshire in succession to Sir Henry Aubrey-Fletcher. I look forward to fulfilling the role and aim to serve the community with commitment and purpose for the benefit of all who live in this wonderful county. To be the first woman to hold the Office in Buckinghamshire is a special privilege.

Sir Henry has been an inspirational Lord-Lieutenant, upholding the dignity of the Crown, as Her Majesty’s representative. He has immersed himself indefatigably in every facet of community life, giving selflessly of his time, and providing support and encouragement to all he met. We owe him a great debt.

He has been staunchly supported throughout his tenure by his wife, Bobbie, whose warmth and kindness has endeared her to so many. Sir Henry and Lady Aubrey-Fletcher have given generously of themselves for the good of the county, and I extend my gratitude and best wishes to them both.‘

In his farewell message Sir Henry Aubrey-Fletcher said: ‘I am leaving a role that it has been my honour and privilege to hold. My time in office has allowed me to meet the most wonderful people across Buckinghamshire, who have nothing but the best interests of our community in mind.

It has been a great joy to be invited into the lives of so wide a variety of people, and it is a chapter of my life that I shall never forget. I have received nothing but kindness and support throughout, and I feel most fortunate to have had this opportunity to serve Her Majesty the Queen in this County.

I wish my successor Lady Howe success and happiness. She has been an active member of the Lieutenancy since her appointment as a DL in 1995 and is a wonderful advocate for this very special county. It is also an historic day for Buckinghamshire as we will be welcoming our first ever female Lord-Lieutenant.

I thank fellow members of the Buckinghamshire Lieutenancy for all their support, and my wife Bobbie and family for their encouragement. Above all, I thank the people of Buckinghamshire, for all that they do for our extraordinary county.‘