Vision for an orbital route around Aylesbury 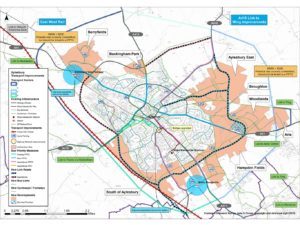 Orbital vision: The plan for link roads that make up a ring around Aylesbury.

A petition calling for greater investment in Aylesbury’s road network has resulted in a vision for an orbital route around Aylesbury being put forward.

The petition calling for greater investment in Aylesbury’s road network was organised by resident Kevin Cox and received 3,419 signatures. It was welcomed by Greater Aylesbury Local Area Forum (LAF) at a meeting on the evening of Thursday 22nd June 2017.

Mr Cox’s petition says the fragile road network around Aylesbury can no longer cope with the volume of traffic generated by a population increase over the past few years and calls for serious consideration for a bypass around Aylesbury.

‘The transport strategy plans a series of new link roads that form a complete circuit around Aylesbury fed by eight existing radial spokes,‘ said Brian. ‘These roads aim to divert cross-town and through-town traffic around the outside, and help achieve what petitioners are campaigning for.‘

‘Linked with better cycling, walking and public transport, the orbital route’s aim is to add capacity to help reduce the impact of growth,‘ said Brian who continued ‘I welcome the petition and the suggestions made. This democratic process really does help to get matters of public concern like this on to the local agenda.‘

Mark Shaw, Deputy Leader and Transport Cabinet Member at Buckinghamshire County Council, said he, too, welcomed Mr Cox’s petition. ‘I believe the petitioners are pushing at an open door,‘ he said. ‘Our vision for an orbital route creating more capacity in the network isn’t a million miles away from their suggestion – it’s what we’d love to do, given the money.‘

But, he warned, the vision couldn’t be realised overnight, although two sections – the Western Link Road and the Stocklake Urban Link – were already complete, thanks to Government grant funding and contributions from developers.

Other sections to the east – linking the A41 with the A418 – and in the south, linking to a new Stoke Mandeville bypass, are expected to be built during the coming three years. And sections to the west and north-east are still lines on a map.

‘Completing the orbital route may be a few more years away,‘ said Mark ‘There’s no bottomless county council purse. Our plans have to be funded by statutory contributions paid by housing developers along with funds we bid for from the Government. But we’re looking at every opportunity to raise the necessary funding.‘

The Aylesbury Transport Strategy was based on a ‘worst scenario’ growth in the number of households of 40% by 2033. In that time the number of local jobs was projected to grow from 62,000 to 80,000. The Strategy embraces aspirations from the Greater Aylesbury Garden Town bid and the Town Centre Improvement Plan, and feeds into the Vale of Aylesbury Local Plan.