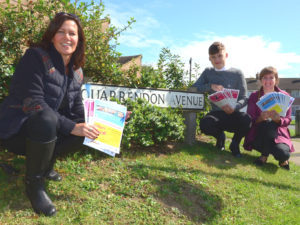 A scheme to combat loneliness, isolation and develop a community where neighbours look out for one another is being set up on the Quarrendon estate in Aylesbury.

Spearheaded by Buckinghamshire County Council, the scheme aims to recruit residents in every road on the estate and provide them with resources and free workshops to heighten awareness of issues such as doorstep crime, scams, domestic abuse and nutrition. It is hoped the scheme will increase the well being and safety of the community.

The launch of the Quarrendon Street Association will take place at the Community Centre in Meadowcroft at 6.30pm on Tuesday 26th September 2017. At the launch event residents can collect information and sign up to be Street Members.

Project leader Helen Cavill said research showed Quarrendon had lower than average healthy eating figures, a higher than average number of smokers, and that 20% of children were living in poverty.

Scam and doorstep crime figures among Quarrendon’s 1,700 homes are high however the amounts of money scammed were low, often no more than a few hundred pounds, with a substantial number of mail, phone and email cons.

‘We’d like Street Members to work with their neighbours, building on a sense of neighbourliness, to ensure everyone in the community feels safe, valued and cared for,‘ said Helen.

The first workshop, which takes place on Tuesday 3rd October 2017 from 2.00pm to 4.00pm, will help residents protect themselves and their neighbours against targeted fraud in the form of phone and mail scams as well as doorstep criminals.

The Street Association idea was first piloted by the County Council in Hughenden earlier in 2017. Six months from its launch the scheme thrives in eight villages and has sixty Street Members covering thirty seven roads with more than thirty members attending training workshops.

Hughenden Valley Street Member Anne Smart said she introduced herself to residents in her road, who attended a neighbourhood barbecue. ‘Now they all know I’m on hand if needed and I think this is a good way to strengthen the community,‘ she said.

Anne Wight, Deputy Cabinet Member for Community Engagement and Public Health at Buckinghamshire County Council, said: ‘I’m really encouraged by the way the residents in Hughenden parish have pulled together and worked so well to promote safety and well being among their neighbours.

Now there’s a great opportunity for residents in Quarrendon to band together to promote a sense of community and belonging.

I want to encourage their community spirit of goodwill to make sure we hold on to a tradition of neighbourliness, and make Quarrendon a safe place for our children and families.‘