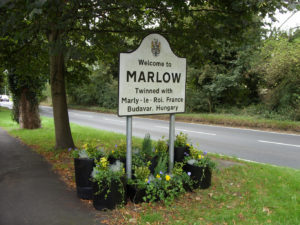 An armed robbery took place at a newsagent in Marlow on Thursday 11th January 2018.

The incident took place at 8.50pm at Marlow News in Newtown Road, Marlow.

A masked man armed with a bladed object entered the store and threatened a member of staff, a woman in her thirties, with a knife. The robber then demanded money from the till.

The man made off with one of the black till drawers and ran off down Newtown Road, turning into an alleyway which leads to Willowmead Close.

The robber is described as a white man who was wearing a black scarf covering his face. He was wearing all black clothing and had his hood up, with a grey baseball cap underneath. He was wearing work boots and blue rubber gloves.

Investigating officer Detective Constable Aimee Summers, based at High Wycombe police station, said: ‘We would urge anyone who saw the offender or anyone acting suspiciously to call us as a matter of urgency via our enquiry centre number 101.

Anyone with any concerns about the incident can speak to local officers on the same number.‘

Thames Valley Police are appealing for anyone who may have any information relating to this case to please call 101 quoting reference 43180011295, or contact Crimestoppers anonymously.

A summer of FREE family fun is taking place in High Wycombe Town Centre during August 2021.

A murder investigation has been launched by Thames Valley Police after a man was found dying in Micklefield Road, High Wycombe.

A new gift and craft market is coming to Aylesbury from Saturday 31st July 2021.

Roadworks for the week ahead – Monday 2nd August 2021

Week commencing Monday 2nd August 2021 Transport for Buckinghamshire will be carrying out work at the following locations.