Opinion : Should Frogmoor be turned into a car park?

Let’s face it modern day Frogmoor is a lawless part of town where anything can happen at any time to anybody.

Once known as the Frogmoor Gardens due to the lovely ornamental gardens and fountains that were once there, nowadays in the daytime it’s a barren concrete wasteland frequented by tramps and gangs of yobbos looking for a fight while at night drunken yobbos stagger across the area searching for a pub that will let them in.

The part of town has come to signify everything that’s wrong with Wycombe.

The other weekend my good self happened to be in the Frogmoor area and to my amazement two vehicles were parked on the pedestrianised area. A white van and a licensed taxi. 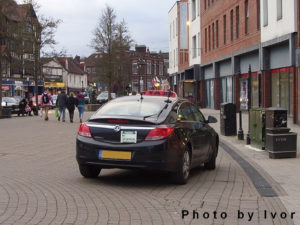 Obviously these vehicles should not have been there, but they were and more worryingly nobody was doing anything about it.

After pausing for thought my good self came to the conclusion that perhaps Frogmoor should be turned into a car park? Not only would the extra parking spaces help to bolster the number of spaces in the town centre but if the vast concrete expanse was filled with cars then the yobbos would not be able to run amok in the area.

Maybe some enterprising person could even start a ‘hand car wash’ service on Frogmoor so people could get their cars washed while they do their shopping?

If the remains of the failed fountain at the Oxford Street end of Frogmoor were opened up the drainage holes from the old fountain could be used to take away the water from the car wash.

It seems that anyone can park a car on Frogmoor without worry. After all this in High Wycombe where anyone can do anything they like to anyone and get away with it.

From what yours truly can see the only difference between modern day Frogmoor and the Wild West of the USA in the 1800’s as portrayed in the movies is that in the movies a sheriff is likely to ride into town and sort out the bad guys.

In modern day Wycombe nobody appears to be taking effective action against the bad guys whatsoever and the bad guys have taken over the town.

There are less than two weeks to go until Her Majesty the Queen’s Platinum Jubilee weekend (Thursday 2nd to Sunday 5th June 2022).

An appeal for witnesses has been launched by Thames Valley Police following an incident involving an e-scooter High Wycombe.