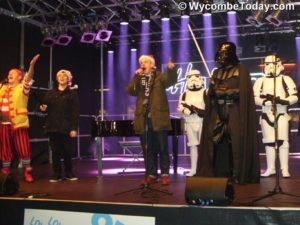 High Wycombe town centre was packed with thousands of people both young and old this evening, Thursday 19th November 2015, all eager to watch the switching on of the 2015 Christmas lights in the town centre.

Just after 6.45pm the town centre lights were turned on from a stage in Frogmoor with the help of Lord Darth Vader. The crowd cheered as the lights came on signalling that Christmas is on its way to High Wycombe.

The celebrations started at 4.00pm and continued until well past 7.00pm. The High Street was filled with festive rides and attractions with a community stage located in front of the Guild Hall.

Under the Guild Hall a pen containing real reindeer proved to be a great attraction for the younger members of the town present.

Church Street was filled with a festive market featuring food stalls selling cuisine from around the world.

Frogmoor was filled with stalls and yet more fairground rides, it was also the location for the Main Stage which was hosted by Phil & Luke from The Wycombe Sound 87.9FM Drivetime team. 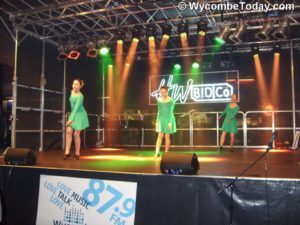 Shortly before the lights were switched on the Mayor of High Wycombe, Cllr Mohammed Hanif, and the Vice-Chairman of Wycombe District Council, Cllr Mahboob Hussain JP, made speeches to the assembled audience.

The crowd then waited as Lord Darth Vader approached the stage from the direction of Temple End before taking to the stage. At the drop of his lightsaber the town centre lights were switched on.

After the lights were switched on the crowds walked back towards the High Street to see the town centre lights in all their glory.

The evening proved very popular and an enjoyable time was had by all who attended.

« Welcome back Wycombe Sound 87.9FM
Witness appeal launched after motorcyclist is found dead in undergrowth on the M40 »

Fire broke out on a flat roof in High Wycombe

Fire broke out on a flat roof in High Wycombe during the evening of Monday 21st September 2020.

Firefighters rescue a child stuck on a climbing frame in Chesham

Firefighters successfully rescued a child stuck on a climbing frame in Chesham during the evening of Monday 21st September 2020.